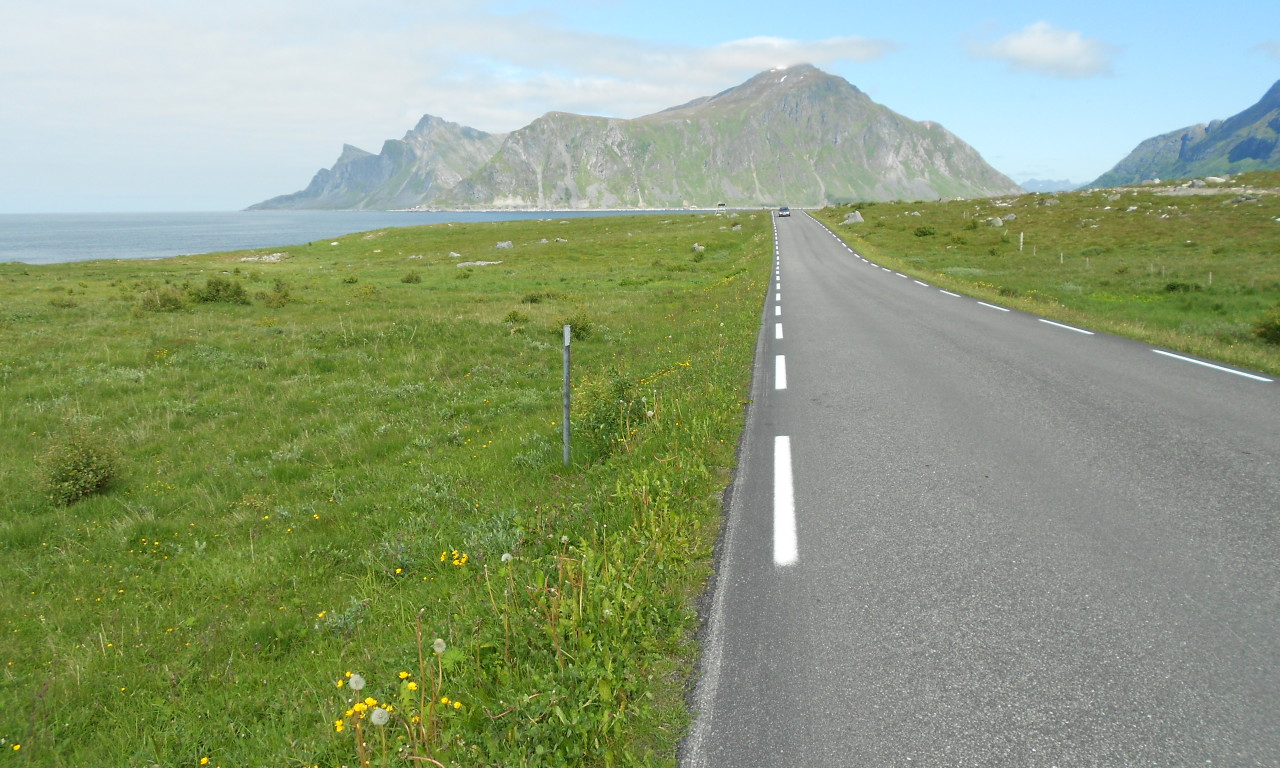 So, after a fabulous day I walked for some hours and then got the bus to a small town in Lofoten. I got off and thought, well what I am really supposed to do is to knock on doors and get somewhere to stay. So I saw what looked like a small farm on the outskirts of town. I really didn’t feel like knocking on the door, it was about 6pm but I forced myself to do it as its what I have said i am going to do. It was surrounded by quite a thick little forest but it had some bird feeding apparatus and though it looked very plain and a bit oldfashioned i thought it looked OK. So I rang on the bell, knocked on the door and waited and no-one answered.

I went round the back to check it out and called out and after a bit the upstairs window opened and a man with no shirt called out rather angrily from the window. I tried to explain my project and asked if I could put up the hammock in the little forest. He barked out that it might be possible but only for one night. Yes thats fine I said. But you must clear up all your rubbish and take it with you, he shouted. Yes of course, how many are you living here? Its only me. And watch out for the bulls!

Ok, am I totally mad? This seemed like a totally Hitchockian moment, but for one reason or another I set up the hammock. Well two reasons really. One is that I had decided I should stop hanging up the hammock at midnight when I am really tired, but do it in good time so I can do it a bit better. And the other reason is that Peace Pilgrim had a beleif that all people are basically good, but you have to meet them in the right way. So on the one hand I was wondering if he was peering out through the window and making terrible plans, and on the other hand I was sitting in the sunny field with no bulls and wishing him well. Wishing him peace in his heart. There were a lot of mosquitos so I walked up and down the road quite a bit and then went to bed. Can’t say I slept that well.

Finally woke up and got up 6.30 and walked round the back garden. There he was. Staring intently at something. I said good morning and he seemed shocked, he said he is not used to having ladies in the garden. So I asked what he was doing. Well its the terl baby (a kind of seabird with a long red beak and red legs). Its just come out of its nest and fallen down and I don’t like it. So then he showed me the contraption he has made over the top of the barn where the terls can safely look after their eggs and young. He had put artificial grass there and made a place for them to nest. It turns out he looks after them every year. Some times they make it and sometimes they don’t.

Its so hard to understand that this is the same bloke who shouted out of the window yesterday. He looks and behaves totally differently. He is offering that I can stay as long as I like. That he is making a new kitchen where if I come back next year he will make food. Etc. Another man comes over to visit, he is the chairman of the local ornothological society. Here he is

And while the farmer went off to help another farmer, he told me lots more stories of how local people have always cared for birds. In between we sit there quietly and he notices some or other bird activity in the garden. In the end the farmer returns and they chat about the foxes and crows who are taking so many of the bird babies and their techniques for saving them.

The farmer drives me down to the next place suggested by the birdman.

On the whole people in Lofoten seem very relaxed but still quite a lot of people don’t dare to open the door. It’s natural. I get scared of people so not strange that people get scared of me. Its more than nice when that turns around.