Georgiana used just a few props a beer bottle, a samurai sword, a coconut. Her body was her instrument; her expressions, voice, gesture and contact with the audience. It’s rare as an adult to experience this, perhaps that’s why we became dreamy and blissful. Georgiana’s talent was spellbinding, and at the same time the theme appeared clearly as we recognized our own society’s over-consumption and climate change.

People were transfixed, chuckling, quietly fascinated. Georgiana told with her whole self. She was able to express everything, from loving attraction of an Inuit woman, to religious fervor of the strictest kind, despair and hunger, or the Japanese warlords optimism for his society. When you hear Georgiana it’s almost like you want to run out and climb in a tree! The stories are humorous, warm and serious at the same time. She brings a joy of telling which is infectious, and she moves so lightly and expresses such clear pictures that she awakens something childlike and playful in the listeners. To use this storytelling like this is pure gold when one has a message to deliver. Sunniva Kambestad, Naturvernforbundet

You are not just clever you are magic. Like a goddess on stage who made an amazing world for us, as we sat and listened with our ears, eyes and hearts. Many, many thanks! Veronica Salinas,Norwegian storytelling festival.

This was better than Al Gore!Lejre festival, Denmark

This performance is a thought provoking and moving story about what can happen in a society which experience climate change or extreme damage to their environment. I recommend this performance to everyone who is interested in this theme, its moving but also inspiring.Marte Rostvag Ulltveit-Moe, Naturvernforbundet, Kristiansand

You were at Lejre festival last year. We agree that you are a fantastic storyteller, and want to invite you again this year.Denmarks Lejre storytelling festival

I liked your CD. The truth is that it was brilliant. Not just very good!I only know of one storyteller as good as you: Alf PrysenKjartan Haug, musician

Thank you very much for your CD. I have listened alone and with my husband. The stories have a seriousness and your voice is transmitting your devotion in a way that makes a deep impression. I was thinking that in a way you are establishing your own church and that in this church I would like to go often.So thank you.Vibeke Brdahl, Ph.D., Dr.Phil., senior researcher on Chinese storytelling

I had the opportunity to listen – see your stories on Youtube today – about happiness and about the speaking potato. That was great and wonderful to hear you doing your work so beautifully.I really enjoyed your wonderful CD and all the glorious stories told in such a vivid way that you could almost see the characters moving before you. Inger Lise Oelrich, storyteller and director

Georgiana is a fantastic storytelling who is committed to the environment and I am so glad she brought her stories and helped us to think and tell with enthusiasm. Its been a joy to have her as course leader! Ingvald Erga, Environmental advisor/Green Living

Dear Georgiana, Many, many people approached me, telling how great you were.Peace Corps 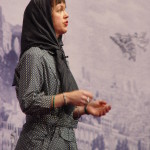 The group was very happy and greatly appreciated your contribution!EU conferance, IMDI: How to promote good living conditions for children and youth

Thank you on behalf of all at the Soil Association for bringing your story telling skills into the organic movement, both at workshop and at the conference dinner. I had fantastic feedback from those that attended the workshop.I also thought that the storytelling during the dinner worked really well and think that it should become a permanent feature of future Soil Association gatherings. As you have rightly said we are all story tellers whether we realise it or not and the important thing is to engage with this and develop our potential.Patrick Holden, CBE,Soil Association, Bristol

Hei Georgiana!  Many, many thanks for two fantastic days! You really took us into the world of storytelling and to use our own resources. I’ve had so much good feedback!Alna Council

I’ve been talking to parents and they say their children have retold the story of the Wind Eagle and One eye, Two eyes and Three eyes and others nearly everyday at the dinner table. Tree project,Bronnoysund